Welcome to my Q1 2009 Global Trend report for Facebook. I prepare this quarterly look at Facebook to help you visualize patterns in the community and have a realistic view of the population free from marketing hyperbole.

As always, I use the data that Facebook provides directly from their advertising management system. Actual numbers may be larger, but we're marketers and these are the people who can be marketed to. Each country's data includes all age ranges. The data compares the populations at the end of Q4 2008 to the same population's numbers at the end of Q1 2009. 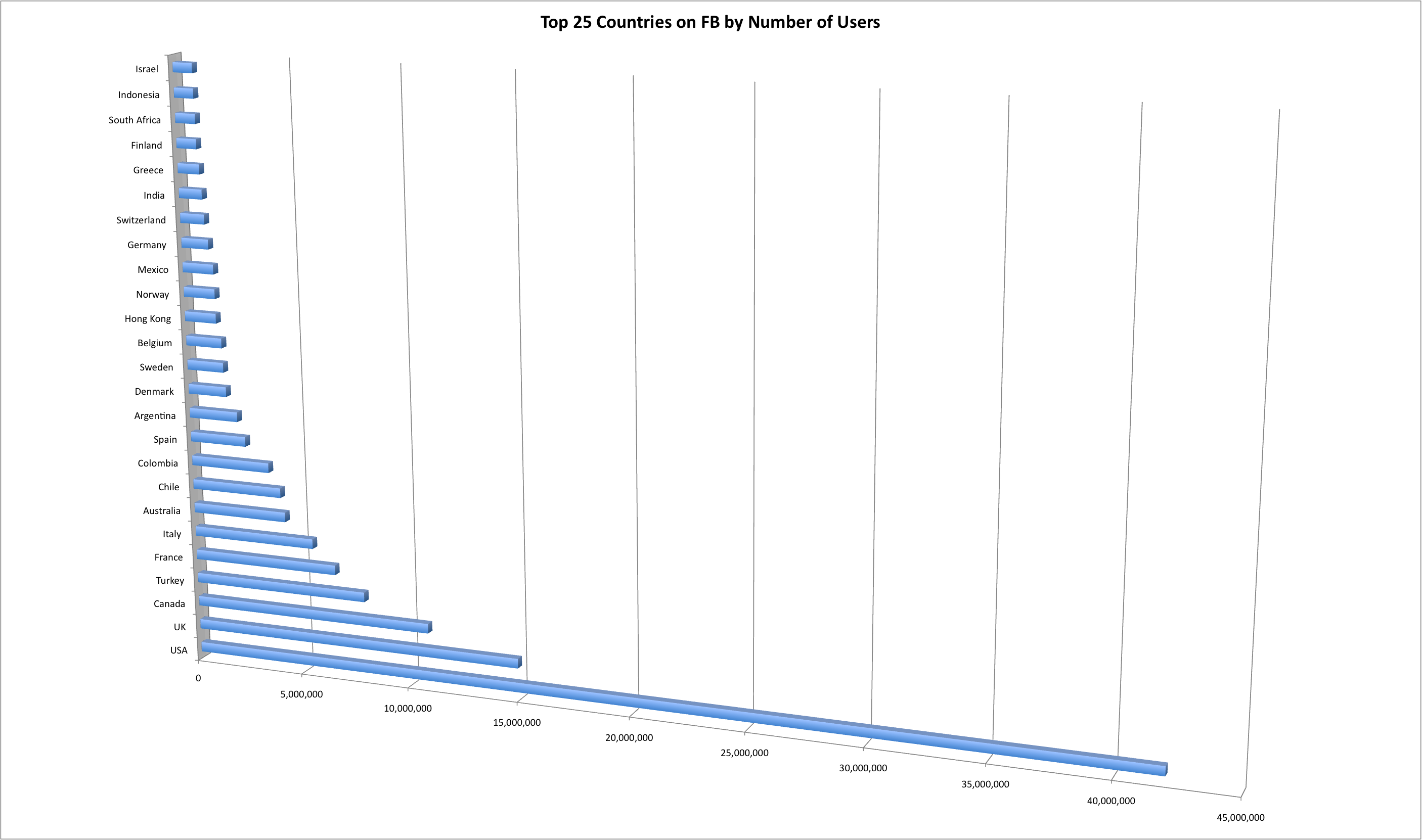 Top 25 countries by highest % of total population on Facebook 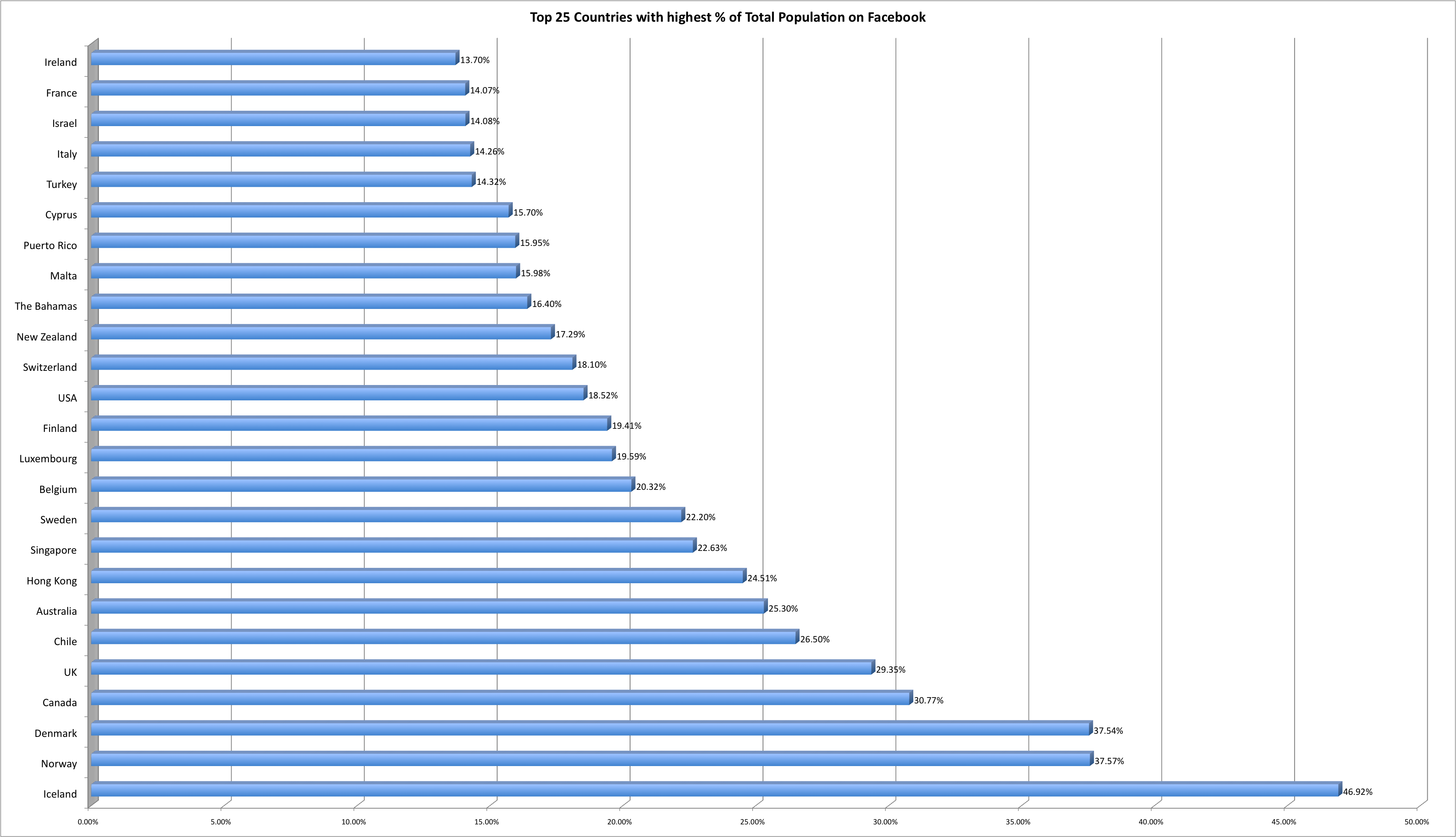 [Click image for larger version]
*Note: This chart uses the total population of each country (not the online population) 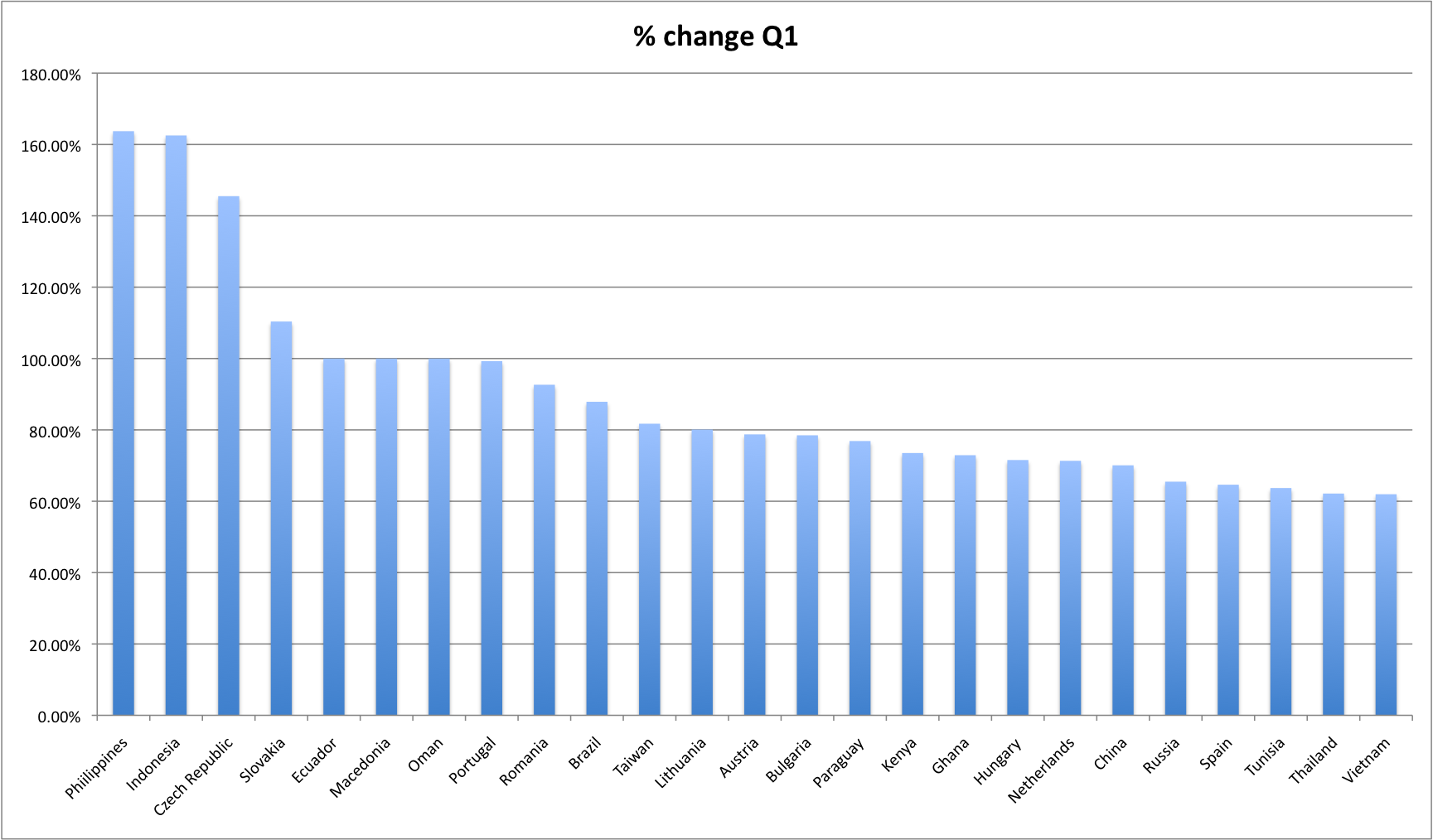 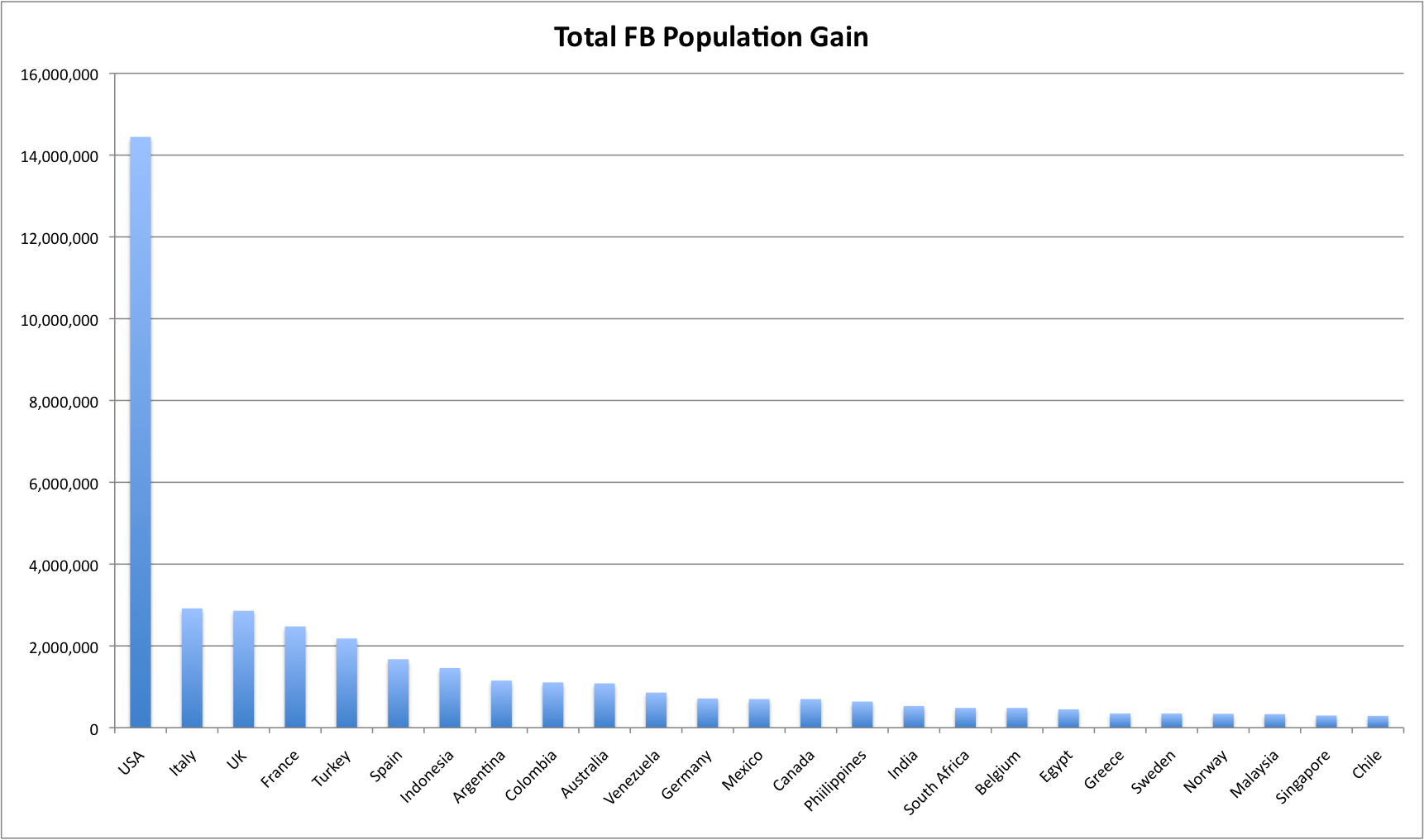 Does anything surprise you on this? Anything else you would like to know?

When everything becomes social, what is "social media"? 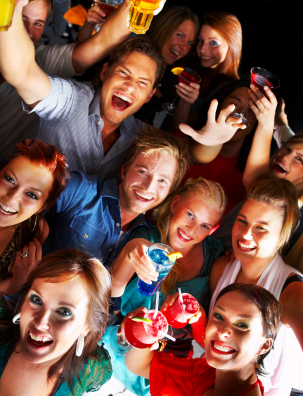 What do you think of when I say the term "social media"? Do visions of Facebook pages, Twitter accounts, YouTube channels, blogs and wikis dance through your head? If you do, I think you're selling yourself short. VERY short.

Social media is a fad. All media will be social.

For the past year, I have included a slide in my presentation decks that says "Social media is a fad. All media will be social". We're already seeing instances of this in mainstream media. Just look at the Facebook/CNN partnership for the inauguration. It nearly crippled business networks around the world as people chatted with their Facebook friends while watching broadcast TV online.

This is an experience that has been taking place through divergent platforms for more than a decade (IM + TV), but is now becoming integrated into a single user experience. Just open Twitter during prime time TV and see what dominates the conversation. It's people talking together around a common topic enabled by whatever show is on.

Current showed us another example of the integration of TV with social technology as it flowed in real-time messages from Twitter during broadcast. This is a clunky solution for now until cable platforms integrate these services into the broadcast or they focus more on online delivery of content. 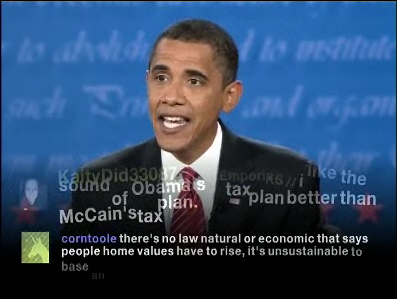 In-person events are even taking advantage of social technology to make the event even more engaging. Speakers (including myself) take questions on Twitter and engage people beyond the four walls of the room. Live streaming of video allows a global audience to participate in a local event.

Social technology is allowing radio broadcasts to expand their conversations as people engage online while listening or even while not listening. Smart stations are engaging with their audiences through multiple platforms. Each morning I listen to the BBC's Radio 1 on my drive to work. The Chris Moyles Show uses multiple platforms including Twitter, Facebook, email and SMS to engage the audience in real time. The hosts are savvy and the technology is simple and fast.

Mobile device experiences will become increasingly more social. You're seeing the start of this now with applications like Loopt and FourSquare, but you will see social interactions around news content via iPhone apps or any other platform that brings people together.

Does news become more relevant when discussed with my peer group? Absolutely. Once of the main problems with most social content is that the group of people commenting/creating are not relevant to my interests (see YouTube comments for example). If I can select who I have conversations with on certain topics, it's very valuable to me. I'm not saying we should censor people, but the technology allows for added relevance that we should be taking advantage of.

Even outdoor ads have started to become vaguely social. Mini Cooper took the lead on this a few years ago by using RFID technology to display custom messages to their customers as they drove by. 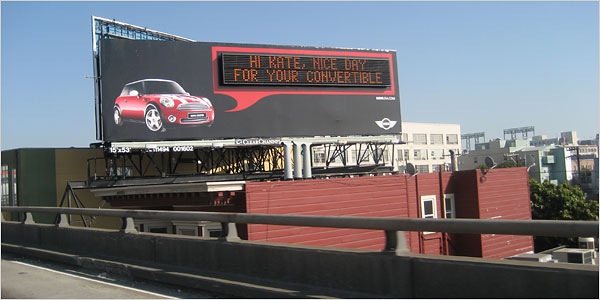 So, instead of taking a narrow, short-term view of "social media", we need to step back, look at all media and see what the social technology potential is and look at how to take advantage of that to deliver more relevant experiences.

How does this notion that all media will become social change your view of media? Is TV/radio dying? What about magazines? Do these have to be digital to be social?

Let's hear what you have to say!

Note: If you're interested in having me speak to your group or organization, check out my speaking page to get in touch with me.

So sorry for the delay in this report. MySpace seems to only update their ad targeting stats every other month (Facebook is done in real time). This is the latest edition of my look at social networks and their populations from a marketing perspective.

All numbers in this post are US-only and are collected using each site's advertising management systems so they are up to date and accurate from a marketer's perspective. (Who wants to talk about populations that can't be reached by marketing? Not me.)

What you need to know right now: 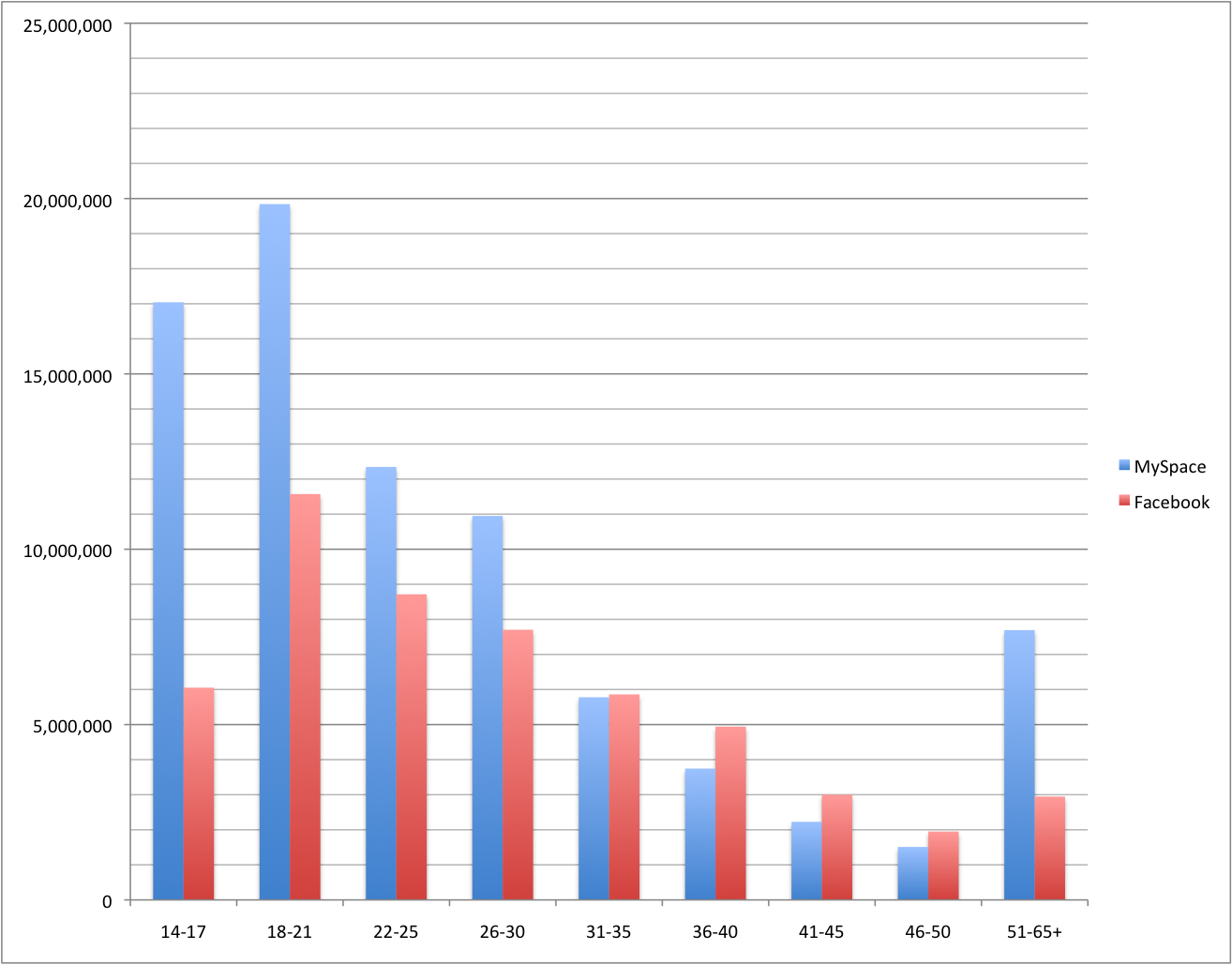 Looking at Women on both sites: 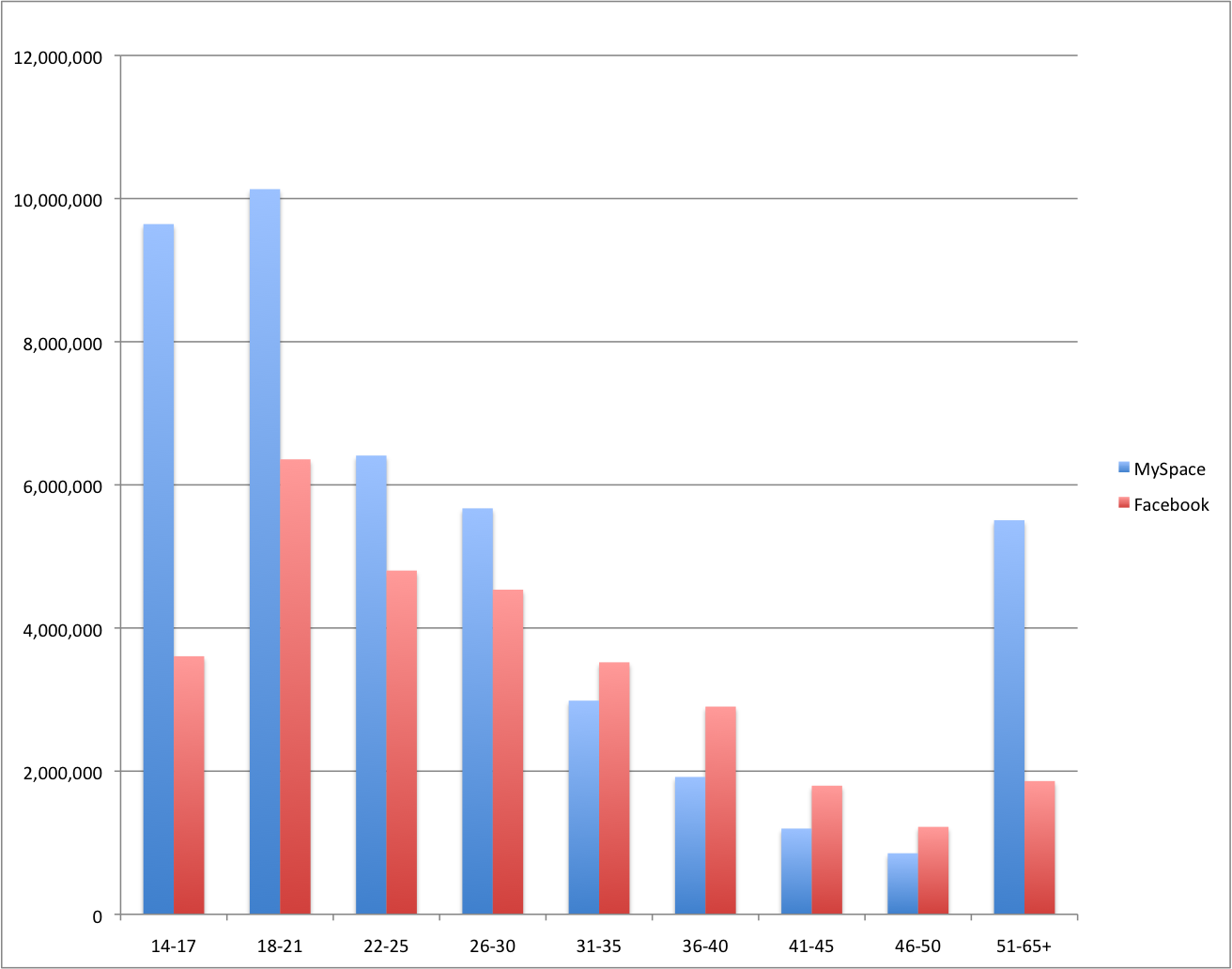 Looking at Men on both sites: 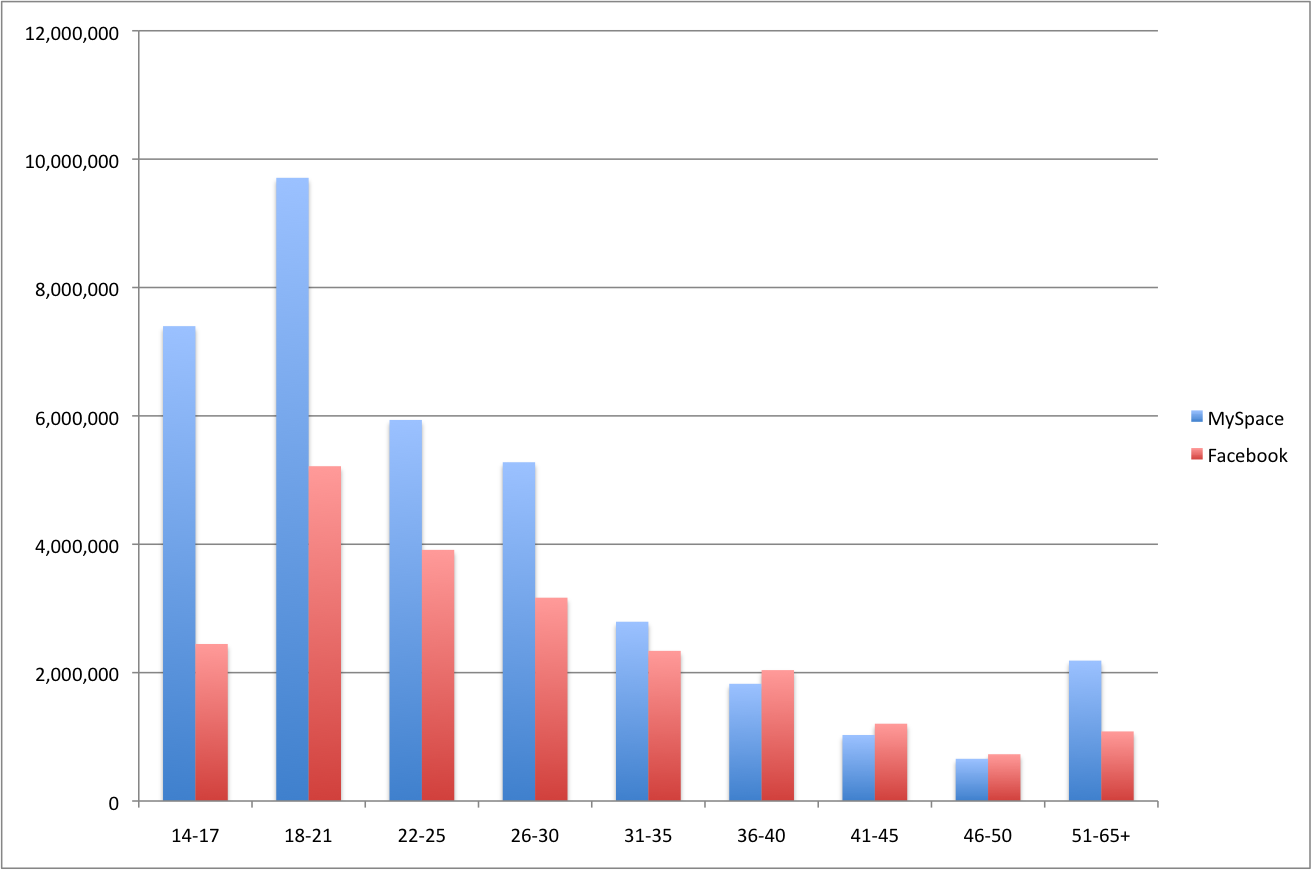 Here are the actual Feb/March numbers:

What do you think? What other networks are you investigating? The demographics and targeting options on both sites let you reach your audience in targeted/tailored ways and minimize waste. Knowing where your customers are is key.

Data sources: If you're curious, here is where the data comes from on both sites. 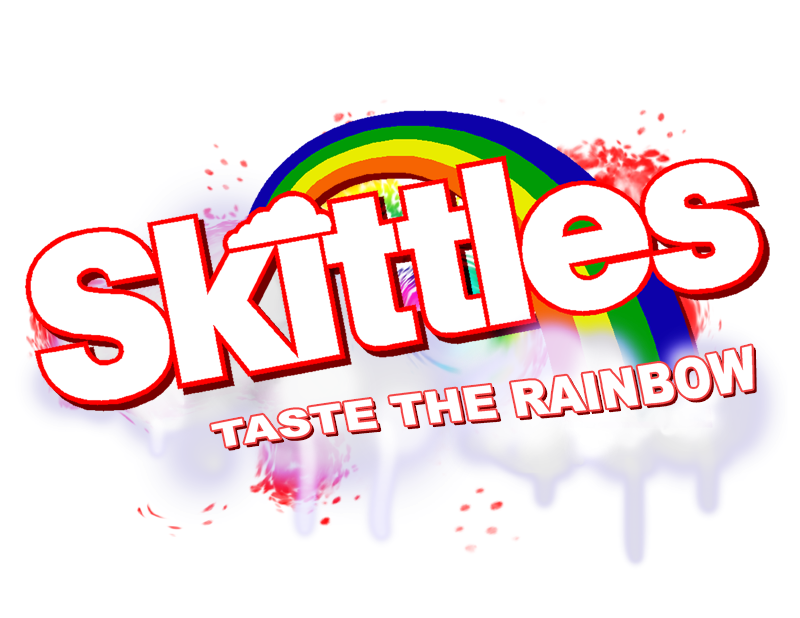 Launched is a series that I am renewing to highlight practitioners who are using social media in consumer and B2B campaigns. The goal here is to cut out the theory and rhetoric and focus on real world examples of social media in action.

** Let's cut the BS on this one. I've seen a lot of people pontificate on if this launch is good or bad. Honestly, that is up to Skittles and their agency who are the keepers of the campaign objectives and analytics.

Now, on with the post. There has been a lot of buzz around the new launch of the Skittles.com website. Long story short, Skittles launched a site that uses third-party social media outlets as the base for their content. That means load up the site, you see a small Skittles widget on top of either Facebook, Twitter, YouTube, Flickr or Wikipedia. Take a look at the video to see what I mean.

It has certainly created a lot of initial buzz, but that seems to be quickly tailing off. 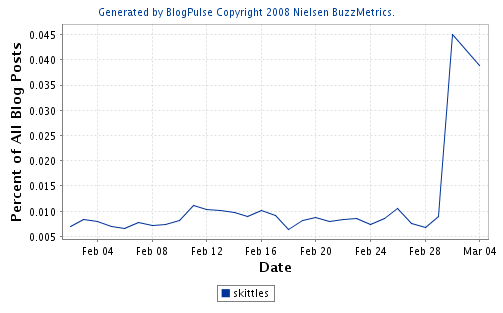 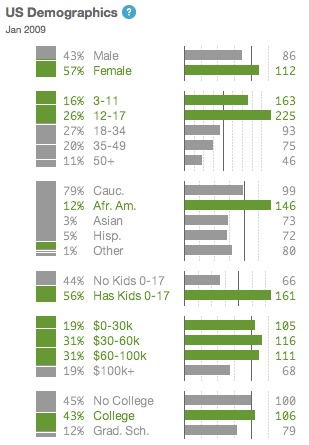 What I have not seen, and this may be more telling about their overall approach, is engagement from the brand. No outreach, commentary or other follow up. That is a huge loss for the brand in extending the conversation to an even broader audience.

As I mentioned in the video, the age verification "restrics access" to the content (even though it is wide open if you go directly) if you are under 13. Via Quantcast (not 100% accurate, but picks up trends) around 16-26% of their total visitors are under 13. Doesn't make a lot of sense to me.

What say you? Take the following poll and let me know. Is this smart, dumb or are you waiting to see?

For my complete library of my videos for marketers, click here.

To help you stay on top of what is happening in digital marketing and social media subscribe to the Techno//Marketer podcast on iTunes. Stay informed and get access to new videos first.

If you use another podcatcher you can grab my podcast RSS feed here.

If you are at all involved in social media, either on the client side or the agency side, you have heard of Radian6. This Canadian-based company has used its own tools to grow their influence and broaden their customer base. Post nearly anything about the company or its employees and you will have someone stop by your site to leave a comment or lend a hand. (Disclosure: Radian6 is a partner of Fleishman-Hillard, my employer.)

Just this past weekend, Radian6 released an updated version with a new set of features. If you remember in my post 'Executing a listening plan' there are three layers to doing this well. Radian6 handles the social media/forum/micromedia data very well and helps coordinate the people layer. It does not include print news, TV or radio.

I think it's time to give you a tour of the product, show what it is capable of and discuss how it may fit into your listening plan (current or future).

I am going to do more of these videos on other measurement tools to show you what the landscape looks like. If you have a suggestion or recommendation for a future video here on Techno//Marketer, drop me an email!

For my complete library of my videos for marketers, click here.

To help you stay on top of what is happening in digital marketing and social media subscribe to the Techno//Marketer podcast on iTunes. Stay informed and get access to new videos first.

If you use another podcatcher you can grab my podcast RSS feed here.